Harpic: under the microscope

Harpic: under the microscope

At RB, our 200-year history is something we’re incredibly proud of. It’s the stories of the people who work here and the rich heritage of our brands that have made us who we are today. Throughout this series – Our story l Our heritage we will be looking back at RB’s incredible history and uncovering some little-known facts along the way.

Today, we’re turning our attention to one of our oldest brands: Harpic.

Celebrating its 100th anniversary this year, Harpic was developed from the ashes of the First World War. For Harry Pickup, Harpic’s inventor, one man’s trash really was another man’s treasure and the product he created in the rubble of post-war London remained the same for almost 40 years. It was just that good.

But before we get ahead of ourselves, let’s go back to Harpic’s humble beginnings a century ago...

Rising from the ashes

Harry Pickup, a ‘gentle man’, was a heating and sanitary engineer living in London.

At the time, Harry was maintaining a number of London’s toilets and was facing a troublesome issue. The local hard water meant that despite being hygienically clean, the toilet bowls and rims appeared dirty due to the build-up of limescale. It was a growing problem and he had been on the lookout for a solution for quite some time.

In 1920, he won the contract to clear away the waste products from disused munitions factories across the capital, following the end of the First World War.

While onsite one day, Harry made a revolutionary discovery. He realised that the by-products of the explosives from the munitions factories had incredible potential. When this waste material – nitre cake – was added to water, the mixture formed a powerful acid. Since then, we have added meaningful quality, safety and environmental thinking to ensure Harpic – like our other hygiene brands – is right for the modern world.

Ever the keen innovator, Harry experimented with this new acid. He ground the nitre cake with a coffee grinder to form a powder, added water and discovered that it was the perfect chemical for dissolving limescale. The solution to his problem had finally been found!

Harry recognised the potential of the product so quickly went into commercial production, to share his discovery with the world. 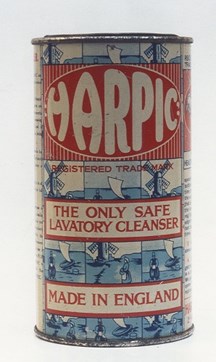 Harpic Toilet Roll launched as a promotional tool alongside the Harpic toilet cleaner and sales of both products got off to a great start.

This caught the attention of Reckitt and Sons Limited – the original RB – and the company was acquired in 1932. Harry Pickup remained involved in the business and continued to innovate, developing drain cleaners, a sealant for cast iron heating systems and even ‘lock and lift’ manhole covers. 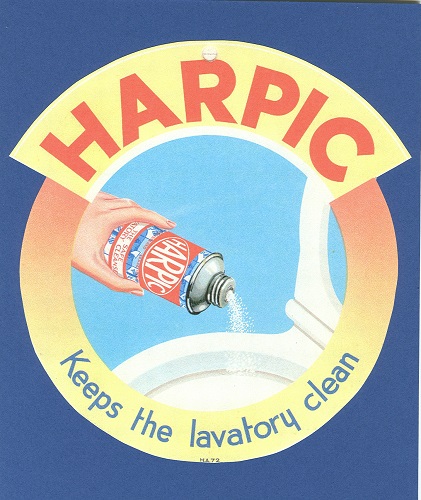 From war-torn Britain to WCs of the world

As we know from Durex: under the microscope, RB has always pushed forwards when it comes to advertising. And the marketing of toilet cleaning products was no different.

Harpic’s advertising has evolved considerably over the years. In the 1930s, it appealed to homemakers’ pride and implied the shame they must feel if their bathroom was spotless but their toilet dirty! The product’s hygiene potential was particularly highlighted as it was the first toilet cleaning option that could reach where a brush could not.

Harpic also represents the first RB brand to feature on TV, with its first advertising campaign launching on screens in 1957 with a catchy jingle: ‘Harpic, Harpic the sign of a clean, clean home!’.

Amazingly, the powdered product Harry created in the rubble of post-war London remained almost the same for nearly 40 years. And together, the Harpic team have continued to build on Harry’s legacy, continuing to innovate, grow and develop the brand into what it is today.

New fragrances have been added, new products have launched, and new formulations have been developed. But one thing has remained the same: Harpic’s brand purpose.

Harpic's vision is: a world where every home has a toilet together with the dignity and safety it provides. Through charitable initiatives – through partnerships with the likes of Water.org - education programmes – such as Mission Paani in India - and far-reaching awareness raising campaigns – like the global #TogetherLive concert series - Harpic is working to deliver on its vision and addressing the world sanitation crisis one toilet at a time.

A special thanks to our heritage team, based in Hull, East Yorkshire, UK, who have been instrumental in the roll out of this series. 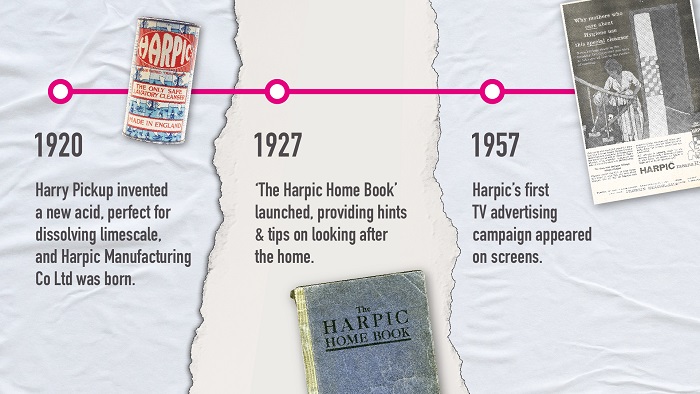 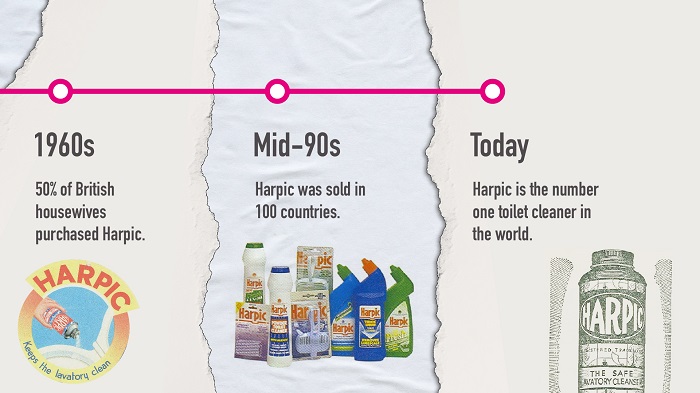