Upon joining Reckitt, and as previously announced on 6 August 2019, Laxman Narasimhan, Chief Executive Officer, received awards to compensate for remuneration arrangements forfeited upon leaving PepsiCo, his previous employer. These awards remained subject to PepsiCo’s performance conditions and full details can be found on page 125 of the 2019 Annual Report.

The final tranche of awards vested in March 2021 and were based on PepsiCo’s performance over the three-year period ending December 2020. As this performance was not known at the date Reckitt finalised its 2020 Annual Report (15 March 2021), the value of the awards was estimated, as set out on page 146 of the report.

Following publication of PepsiCo’s proxy report on 24 March, the final calculation of vesting was completed. The long-term share award vested at 52.6% of target on 25 March and the long-term cash award was paid at 110% of target in March 2021.

The total value of the vesting of these awards, relating to legacy arrangements implemented by his previous employer, was £3,067,845, a reduction of more than £800,000 from the estimate in the 2020 Annual Report.

Further details of the Remuneration Committee’s decisions and the pay for Reckitt’s Executive Directors are set out on pages 134-157 of the 2020 Annual Report.

The updated total value of the replacement awards at vesting and the 2020 single total figure will be restated in the 2021 Annual Report as follows: 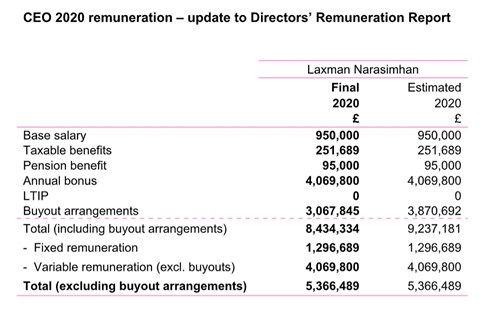