Fybogel asks all to “Mind the Gut"

Fybogel urges all to “Mind the Gut”, helping 10 million Brits keep their ‘tubes’ regular by helping break the cycle of constipation.

Today, platforms at three London Underground stations have been transformed to promote Fybogel and its mission to help break the cycle of constipation for millions of people across the UK. This weekend, roundels on the Tube platforms at Shepherd’s Bush, Waterloo and Seven Sisters will become… Shepherd’s Flush, Waterloo roll and Seven Cisterns.

The campaign by Fybogel aims to help Brits keep their ‘tubes’ regular and make the most out of life on the move* by educating them on the benefits of maintaining regularity when it comes to constipation. 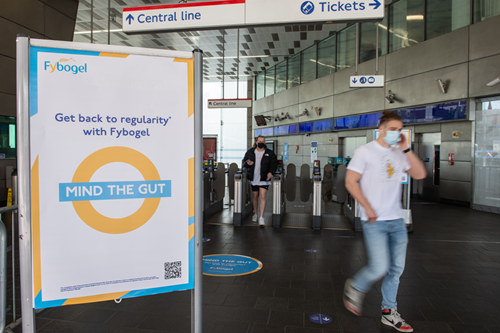 According to research conducted by Bowel and Cancer Research in 2019, over a third of all adults surveyed said they would find it embarrassing to talk about bowel problems with their GP2. With one in seven otherwise healthy adults affected by constipation millions of people are suffering with constipation3 every day from mild to severe symptoms, many in silence1.

If left untreated, constipation can result in severe symptoms, including faecal impaction4. In fact, in research conducted by Reckitt in 2019 among 5,467 UK adults, those who identified as frequent constipation sufferers were more likely to experience a higher prevalence of symptoms, which might include difficulty having bowel movements, hard or small stools, bloating and a feeling of heaviness.1

Through this campaign, which aims to get people talking about this taboo topic, Fybogel is hoping to reduce the stigma and provide meaningful education. Fybogel hopes to empower constipation sufferers to banish embarrassment and take an effective approach to maintaining regularity, and enjoy life without the constraints of constipation symptoms, which could include a lack of energy, feeling sick and stomach cramps.1

When it comes to constipation, many people don’t know or understand what the symptoms are and put off addressing concerns:

We can all be embarrassed talking about personal issues, like constipation. However, it is something which affects millions of Brits, so we need to help stop so many people suffering in silence. We hope that “Shepherd's Flush, Seven Cisterns and Waterloo roll” give people the pause they need to rethink their approach to constipation and help them get back to regularity. Through conversation and education, we want to ensure people feel able to make the most out of life on the move*.

Fybogel Hi-Fibre sachets contain ispaghula husk, a fibre derived from a natural source, which helps your digestive system work more efficiently***, and gently relieves constipation. It works naturally with your body and can be taken daily to help restore and maintain regularity**. Available in Orange 10s and 30s, and Lemon 10s. If there has been no bowel movement after three days of treatment a doctor or healthcare professional should be consulted.

Fybogel has started an interactive online 14-day challenge, for people suffering with irregularity or experiencing constipation that might benefit from taking Fybogel and making some lifestyle changes, including changes to their diet and exercise routines. To get the best out of a life that keeps moving visit https://www.senokot.co.uk/fybogel/.

Fybogel believes that constipation shouldn’t break your rhythm, nor stop you doing the things you enjoy in life. That’s why we are passionate about helping constipation sufferers get back to regularity. Taking Fybogel daily to helps to break the cycle of constipation. It harnesses the power of fibre to gently relieve constipation and help to keep you regular. Find out more at https://www.senokot.co.uk/fybogel/